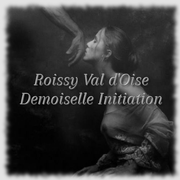 Please join us for a Demoiselle Initiation TODAY at 3pm SLT

A Demoiselle initiation ceremony is at hand.

Please join us as she is brought forth to serve the Dominants of Roissy Val d'Oise.

Maitre Jonathon looked around the chateau and welcomed everyone and then gave the normal notices. Once everyone quieted down, he sent the Debutante's Mentoring Sister, Syndra, to the tower to fetch and bring her forth.

looked up to the Maitre from her kneeling position on the cushion… Yes, Maitre I will guide her here promptly… She used the strength in her lean, muscled legs and a gentle push from the palm of her right hand to gracefully propel herself into a standing position. She smoothly shook her skirt out, clasped her hands in front of her waist and made haste to retrieve the girl waiting in the tower.

Syndra Rothmanay  obediantly brought Em forth, reaching over and giving Em a warm hug, whispering to her,  "Go on inside and take the cushion next to the Maitre's foot."

Em hugged back and, lifting her head proudly, steps inside and kneels before Maitre, lowering her eyes and blushing.

Maitre Jonathon moved into full-swing, challenging Em that she was undergoing the initiation with full conscious awareness of what was to entail and giving full consent, which she was very clear about giving when she answered,  "I kneel before you, as a sign of my submission to the Dominants of Roissy Val d'Oise.  My choice to serve was made the moment I arrived here at Roissy and it has never wavered.  I want this more than my next breath, Maitre."

The House of Samois collar was then snapped around her delicate neck and with pleasure Maitre Jonathon became the Punisher. The removal of her clothing was so perferctly choreographed that it read like a novel, their movements forming a synergistic flow.

The flogging was given with the full authority of a Master in charge, and Em, subservient to receiving, showed how deep her submission is.

... Maitre Jonathon Carbenell takes a step back takiung in a deep breath leading forward with his right leg a bit as He faces her. His dark sapphire gaze settles upon a place upon her buttocks as He draws his right arm back slowly gripping the handle of the flogger tight. He then draws his chin up and swings firmly with his right hand landing the first of the ten blows, his voice echoing as the strike lands across her beautiful flesh "ONE"..  then draws his arm back and swiftly swings to bring the flogger straight downwards again straight across her ass "TWO", is echoed from his lips as the strike lands.

Em Belfire gasps as the flogger hits her in multiple areas along her back as it separates from one instrument of punishment to many.  She clutches the side of the ottoman as another strike falls.  Her head goes back and her mouth opens in a silent O.

He grips tight the flogger as He takes in another deep breath and releases it. He watches her reaction to the strikes, the movement of her body as he yanks the flogger back to his side. He then grips it tightly in hand, turning to glance forth towards her once more, focusing himself. He then draws his hand back and swings forward, not once, but twice, landing two more heavy hard strikes of the flogger straight across her ass with the swing of his arm, his voice echoing out each stike "THREE... FOUR... "

She bites her lip as she hears and feels him count.  the echo of both searing into her brain. Welts rise along her ass and back as if they  are reaching out for the flogger in sweet remembrance and thanksgiving.  Her body shivers as the pain radiates all over into a tingling numbness.

He glances to watch the shiveirng of your body in response to the strikes. He then lifts his chin upwards, to pause for a moment, allowing you to tend with the pain internally for which he was inflicting on you. He then drew his arm back once more, drawing his eyes to focus and once again, He swung out.. one... twice... three more times, landing now three blows, one after the other against you, striking firmly into your ass before pulling his arm back to his side "FIVE... SIX... SEVEN... " he says pausing for a moment "are you ready for the final three?" he asks

Em squeezes her eyes tightly shut as he strikes with the flogger again and again.  Her body begins to quiver and a soft moan escapes her lips.  She almost forgets what number he is one until he speaks again. ... "Yes Maitre, this girl is ready"  Holding her body steady and compliant she awaits him.

Maitre  Jonathon nods hearing her voice, grasping his right hand tightly on the handle of the flogger. He then draws it upwards to swing it straight down, and just as he did previously, he swung it down three times to draw the final three blows, the falls of the flogger striking firmly across her ass with each movement of his arm, before it was settled to his side once more. He then nodded and counted out the last three "EIGHT... NINE... TEN..."

Her breathing is heavy as the final three fall down upon her willing body.  She forces herself to stay on all fours.  Her body feels swollen and red as if a hundred pelts of hail have been raining down on her.  Tears sting in her eyes but she welcomes the release.

Slowly, he steps around her to stand before her. He reaches into his pocket to take out a clean cloth. He then draws it forward to brush along your eyes to wipe them of the tears. He crouches down and whispers "Are you ready to continue Em?"

Em's voice comes out in a softer then she expected and she clears her throat before continuing.  "Yes Maitre.  I am ready with all my heart and soul to continue" as she smiles softly up at him as he brushes away her tears... .

The punisher has completed his task and dutifully hands the leash over to the first opener, Sir Paul, a newly titled Dominant, who serves for the first time in an initiation. He is precise and direct with his commands to Em... he wastes no time considering her needs, but rather focuses on his own and claims the soft warm tunnel between her legs as the first hole to be opened.

He thrusts into her repeated like a iston, mercilessly using her, fondling her breasts, enjoying the feel of her. Clearly he drives Em wild as she arches back into him, lifting herself so that he may more fully touch her breasts.

His growls erupt as his momentum builds. His hand slides down to tease her clit as he rams hard and deep and releases his seed into her. Her pleasureable moans of delight come loud and long at her own release.

Pulling out of her, he slides his cock back into his pants, turning to the second opener.  "She is ready to serve," he says and hands over the leash to Sir Mike.

"Demoiselle, who does that mouth belong to?" he askes, pulling her back to his chair where he unzips his pants and sits back down.

Surprisingly she answers, "House of Samois, Sir Mike," though he doesn't seem to notice or rather care and, grabbing a handful of her black hair, shoves her head down into his lap, ordering her to "show me how well that mouth is going to work for Samois."

When he's enjoyed her mouth, her throat, her soft lips, he pulls his cock away from her and moves behind her, caressing her third hole. "Now let's see how well that ass will serve..." and roughly penetrates in one thrust and continues, impervious to her squirms and moans and whimperings, until he explodes into the tight tunnel.

He lets his cock slip out of her ass, spent, placing it back into his pants, and giving a tug on her collar, motions to Em to follow him.  He stops before Maitre Jonathon, points to the cushion and looks at Em, "kneel now," he orders and then to Maitre Jonathon, "Em has been opened and is ready for that final judgement.

Maitre Jonathon welcomes Em as a Demoiselle of the Roissy Val d'Oise House of Samois. "Congratulations" ring out from those in attendance. Xanadu gives the celebration dance details, Maitre Jonathon invites Sir Mike to take Demoiselle Em to aftercare and the ceremony comes to an end.