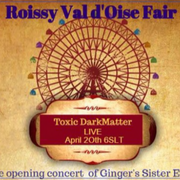 Where:       The Park and various locations

Inspired by the enjoyment experienced as a child when Ginger went to the fair on her birthday, Roissy was transformed into a fairground comprising 8 rides available for all to experience: a roller coaster, bungee jump, drop tower, ferris wheel, water slide, bouncy house, bumper cars and a cluster of colourful balloons that when grabbed floated you up above Roissy.

Congratulations Ginger on the thought you put into this event providing many hours of happiness for members and visitors of the Roissy Community.