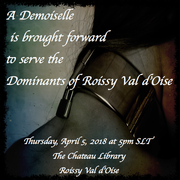 “Welcome to everyone and thank you for joining us for this initiation event today. We are glad to have each of you join us for this special occasion.  Diamond, please bring the girl here from the tower and present her to us, the Dominants of The Château!"

Roissy Aspirante Diamond rose from her cushion, “Yes Mistress Flor, it would be a pleasure.” Promptly she entered the room again, but this time with Dominique, guided her over to the cushion in front of Mistress Flor. She whispered in the lovely lady's ear, then gave her a gentle kiss of encouragement to the right side of her face.  Turning back to the room she announced, “Mistress Flor, Maitres, Masters, Mistresses, I present to you, Dominique."

Flor smiled as Dominique is brought into the room, prepared in lovely garments and placed before her on the pillow, "Thank you, Diamond...." Then she glanced at the girl kneeling before her, "Such a beautiful name for such a beautiful girl you have brought before us today."

Flor looked down at Dominique and watched her closely as she knelt. "Dominique, you were brought here from Samois today, and by your own desire you have come here to be seen and to be initiated to serve all the Dominants of the Chateau.  Are you here of your own free will, and willing to embark upon this new exciting path?"

Dominique responded, a tinge of trepidation in her eyes, “Yes, Mistress, I’m here on my own free will and willing to continue!”

Flor continued, “In the novel of the 'Story of O', as René so generously gave O to Stephen for additional training, so you offer yourself to the Roissy Val d'Oise community to serve and learn as you continue to grow in your understanding of your submissive nature? Do you vow to serve with passion and with fire all of the Dominants of Roissy Val d'Oise, within your limits, to follow the directions of the House of the Samois and to ensure the comfort of all those who would require your service?  It's not too late to change your mind."

Dominique swallowed hard, “I vow to serve with passion and with fire all of the Dominants of Roissy Val d'Oise, to follow the directions of the House of the Samois and to ensure the comfort of all those who would require my service, Mistress Flor.”

Flor stood still for a moment as these words sing in for everyone here. After this moment of silence she takes half step back, and takes a long look at Dominique.  “Very well Dominique, then stand! We all know what comes next. I promise I left my switchblade at the bar. Dominique, we need you naked. turn around!”

Dominique reached back, unhooked her bra slowly, delicate fingers trembled as the silken fabric slid down sensual curves. Her nipples harden in the cool air of the salon; she kept gaze downcast as she slid delicate fingers into her thong slides it down long legs, stepped carefully out of it, and it gathered at her heels.  She began rolling down the stocking, breathed deeply, calmed herself down, stepped out of her high heels.

Flor stood back a little where she can see everything and watched Dominique's every move.  She picked up a short leash from her chair and stepped up a little holding the leash loosely between her fingers.  She attached the leash to Dominique's collar, meeting her eyes for an instant and then with and audible "Click!" itis done and a short gentle tug shows the leash is on securely. “Well then, Dominique.”

Flor led Dominique over to the trusty post, and began fastening the well, worn cuffs around Dominique’s wrists and ankles, then secured her to the post with a few short links of chain. She took a quick moment to admire Dominique's magnificent backside, then pulled out a well, oiled riding  crop from a sheath under the couch.

Dominique closed her eyes as she waited for the bites of the instrument in Mistress's hand; her naked body quaked slightly with fear. She balled her fists tightly as her dome instructed her to count as she swung for the first time.

Dominique yelled as she jerked in the tight chains, tears shoot into her eyes as she counts upward.   One after the other the blows come until Dominique yells Six!Flor stood  still, the tiniest bit winded, had a good look at Dominique, and handed lei the crop for safekeeping.

She stepped up closely behind Dominique, unfastened the chains to the twist cuffs, and then the ankle cuffs, and finally slowly spun her around., back to the post.

Flor took a deep breath, smiled at Dominique, and followed the rhythm of the Gramophone Waltz as she led the initiate over to Mistress Derry who stood to greet them. “Derry, my friend, I have a juicy morsel and she's all yours.”

Mistress Derry grinned a bit and took the leash from her sister Domme and pulls Domi closer, "Thank you, a striking performance, I must say!  Hello my dear, I'm so pleased to be here with you this evening. I heard you say that you're here to pledge yourself, to serve us, the dominants, yes?"

Derry reached down to wipe a tear, "Well you certainly proven part of it with what you offered to Mistress Flor, but as was the case with O, it also requires that you be "opened". Do you agree?”

Dominique nodded humbly, “Yes Mistress, I agree.” and Derry smiled, returned to her chair taking the girl with her.  She drew the girl closer, slipped a finger easily into her pink folds, "Good girl, let's get to it.  Ah good, you're a bit excited."

Dominique gasped and danced on her toe tips carefully.  She moaned softly.

Derry joins the first digit with a second, and then a third, working them in gently but firmly, keeping her goal in mind. “Mmmmm quite tight Domi, the celibacy shows.”

Derry pulled the pretty blonde across her lap, "I need a bit more leverage love." She made all the fingers on one hand into a conical shape stretching the virginal orifice as best she can, but finally sighing, "My fingers are just to slender." She lifted the girl to her feet and stands with her, "Let's step out here a bit Domi."

The girl closed her eyes, going with the situation, she bit lower lip, held breath, then a moan sounds loudly, barriers broke down and she trembled, sank to ground, beads of perspiration cloaking her naked body now. She collapsed onto the soft carpet, breathing heavily.

Derry stood, satisfied, rolled the soiled toy under her chair and urged Domi to her feet with a tug on her leash as she led her to her mentee,  Sir Wick, "Come girl, it's not nap time yet. Wick I believe you will enjoy this, she is a wonderful girl, very worthy in my opinion."

Wick rose to his feet greeting Derry and Dominique, “Thank you Derry smiles we shall see, won’t we?”

Derry gave the girl a wink and returned to her chair.  She turned and grinned at the man, "We will!"

Wick turns his attention to the new Demoiselle, “Hello Dominique. As Derry has opened you in her way now I shall do the same in my way.

”Dominique stood in front of Sir Wick; she watches Wick with shiny blues now, waiting, gazing down humbly. Wick tugged the leash pulling her to the ottoman places on the floor.  He knelt down on the ottoman with the exhausted blonde.  He leaned in, kissed her soft lips before he whispered in her ear, “We are almost done, but first I get to enjoy a moment with you Dominique.”

He pulled from the embrace, unzipped his pants and freed his hardness.  He reached his hand down and slid it between her wettened lips. He smiled, " Nice job Derry."  He slipped a small bottle of lube from his pocket and placed a little on her pucker and placed the head of his shaft placed against it.

Dominique was breathing heavier now as she opened her thighs wide for him.  He pushed slow and steadily into her taking his time to push deep into her ass.  He gripped your hips and settled into a steady rhythm.

She adapts to his rhythm and melted into his movements slowly.  He increased his pace as his hand moved under to place pressure on the little nub - rubbing it in small firm circles.  She moaned low at his touch and nodded wildly, husky fevering voice sounds as her nails dig deeply in the furniture.  She cries out as she reaches her climax, “Yes Sir! Oh yes, thank you!”

Hearing her screams, he let go himself and released the pent-up wave inside him. He pushed one last thrust before he slipped from inside her, stepped back and slid his spent self-back into his pants.  He zipped and offered his hand to Dominique to stand.  He turned to Flor, nodded while adding, “She has served well as I think she will continue to do for the dominants of Roissy.”

Flor stood in front of a sweaty and very disheveled Dominique and grinned broadly. “Derry and Wick, you certainly have opened a new Demoiselle for us! And Diamond, we truly appreciate you preparing Dominique for this moment!”  She took the leash back from Wick with a nod of thanks.

Dominique stood up on wobbly legs.  She still breathes deeply, smiled down at Diamond, whispered a "Thank you" to her lovely mentor.

Flor smiled, “Dominique, I know that being a Debutante is not easy. You learn a lot in a short time, you learn to obey, give up control, kneel, serve, you study write essays and it all happens terribly fast. All to prepare you for this moment.” Flor instructs her one last time, “Dominique face our community please.”

Dominique tiredly responded, “Yes Mistress Flor.” Flor called out, “Derry, there's a girl who has well and truly earned her aftercare. Would you see to that?”

Derry smiled at Domi, "Come dear, you need a rest.”Dominique follows Mistress Derry like in trance, she smiled  now as she looked around the room, ”Yes Mistress.”

Flor turned to everyone, "My friends, Roissy Val d' Oise has a new and very lovely demoiselle. And on that note, I wish you a pleasant evening, and don’t be too good. WE are dismissed!”