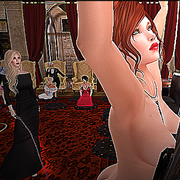 What causes subspcae? During the scene, the intense experiences of both pain and pleasure trigger a sympathetic nervous system response, which causes a release of epinephrine from the suprarenal glands, as well as a dump of endorphins and enkephalins. These natural chemicals, part of the fight or flight response, produce the same effect as a morphine-like drug, increasing the pain tolerance of the submissive as the scene becomes more intense. Producing a sort of trance-like state due to the increase of hormones and chemicals, the submissive starts to feel out-of-body, detached from reality, and as the high comes down, and the parasympathetic nervous system kicks in, a deep exhaustion, as well as incoherence. Many submissives once reaching a height of subspace will lose all sensation of pain, as any stimuli causes the period to prolong.

However, if you ask ten different submissives what subspace is, chances are good that you will get ten different answers. And that’s because subspace is truly an individual experience that can be created through submissive training, but is hard to define.

One of the main concerns with subspace is that because the definition is so vague, it’s hard to tell when and if it actually occurs. Some people believe it’s a physical response, while others think that it’s an emotional change. In any case, sometimes hindering yourself with such a definition can cause more problems with achieving this state.

This informative workshop will cover all angles of subspace for both the submissive and the Domanaint (they go into Domspace, did you know that?). Our subspace workshop is coupled with the SUBDROP workshop. Both workshops are required for our training pathway logs.

Please check our CALENDAR for a listing of classes.